The Best Way to Dry Up Poison Ivy (3 Home Remedies) 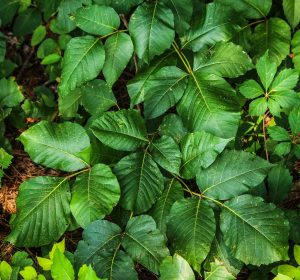 Allergy induced by poison ivy is the body’s kickback to direct contact with this poisonous plant. The leaves, fruits, root, and stem of this plant contain a damaging liquid to the body, known as urushiol.

This substance is also present in poison sumac and oak. In other words, direct contact with these plants causes an allergic reaction manifested by irritation, swelling and frequent symptoms of contact dermatitis.

The irritation developed by poison ivy requires immediate treatment because wounds can cause serious infections.

Poison Ivy is a hanging plant whose fine-edge leaves grow in groups of three, five or seven. The severity of the allergy manifestation, induced by the plant, varies depending on the amount of urushiol to which the body has been exposed.

The main factor triggering the allergy, associated with poisonous plant’s contact, is related to the penetration into the body of its oil. It can be spread through any of the plant’s parts, by inhaling the smoke produced by the burning it or even by touching the dry pieces.

The allergy caused by the ivy is manifested through several frequent symptoms, like:

Cutaneous irritation evolves due to the extension of plant’s oil, within the skin, and not due to the contagiousness of this medical condition. The allergic reactions of the body are often regional.

Hard skin layers, found within the palms and soles, tend to be more resistant and have easier reactions than thin derma, like eyelids or armpits, which are very sensitive.

This medical condition is not contagious; the patient cannot pass it on to the others even though the citrine fluid leaks out of the vesicles. The toxic substance is responsible for all these symptoms since it has already been absorbed into the skin and the body begins to neutralize and metabolize it through leaks elimination.

Treating allergies, caused by poison ivy, can frequently be done at home. The first step is to immediately clean the contact area between the poisonous plant and the tegument.

In some situations, the eruption can be avoided altogether if the patient is very careful, sensing the irritant contact and washing with cold water for, at least, 10-15 minutes. Most of the toxic oil is absorbed by the skin in the first 30 minutes, so skin washing has real therapeutic benefits.

The following steps involve drugs such as creams or ointments with hydrocortisone and antihistamines can work on easing some of the manifestations. They are effective both in diminishing pruritus and in healing the blisters. These types of drugs are able to block the action of a very important mediator of inflammation, namely histamine (hence their name).

Histamine is released from some cells during the immune reaction process that precedes the clinical appearance of symptoms and its presence promotes the maintenance of the results in the tissue (tegument).

Antihistamines may also be released without a prescription. However, parents should not administer such preparations to children without the doctor’s consent, as if they exceed the maximum dose they may have toxic effects

Calamine and menthol based ointments are a proper solution to ease the itching which prevents the patient from healing. When following a home treatment, consider that specialists recommend avoiding certain medications which might worsen your condition due to containing allergenic active ingredients, like:

Healing varies depending on the severity of the reaction. An easy case may take a week, while a severe case may take between three and four weeks. Keeping the eruption clean is important. Any bandages placed over irritation should be frequently changed and applied poorly so that the oxygen reaches the surface of the skin.

Staying away from the poisonous plant is the best way to prevent an allergic reaction. Knowing well the aspect of the plant, during each season, is a first prevention step.

Within the spring season, the plant may be accompanied by yellow or green flowers, along with white berries. During the summer season, the leaves are green; in autumn the leaves change into red.

It is advisable to wear proper clothing, covering entirely your skin when exposed to areas with poison ivy. Pets that are left free, in an environment favorable for poison ivy growth, must be carefully watched.

They can rub off the plant by taking the resin on their fur and then indirectly pass the allergen to people who touch the animal.

Home treatment can also involve wet and dry compresses to reduce itching and redness. However, if you notice signs of infection, such as heat, redness or pain, or if the exposure involved facial, genital areas or large areas of skin, it should be safer to consult a dermatologist. Prescribed medications may be needed to control the reaction and get rid of itching.

The severity of the body’s reaction depends in part on the poison’s ability to penetrate the skin. If an eruption continues to appear on new areas of the body, it is usually because of repeated exposure.

To speed up the healing process, you can, also, consume foods rich in vitamin C, bioflavonoids, beta-carotene, zinc and calcium. These substances have the ability to reduce itching and inflammation.